We Are All Reptilians Now

We Live a Conspiracy Theory

Conspiracy theories are in a special relation with reality, they are perceived either as the most radical and profound explanation of it or as pure fiction. They are theories of extremes - you make fun of them or you approach them religiously. Or at least this was the case before 2008, now it looks like they become more and more common sense, banal reality. The recent occupy movements brought the 1% vs 99% discourse in the headlines and slowly by slowly the "financial elites" moved from the weird Internet sites abounding in one eyed pyramids to the mainstream media. It is not so easy to laugh about conspiracy theories anymore.

Some conspiracy theories described long time ago the verticalization of power, the pyramidal dominance of the world and of our lives by supra-democratic structures and financial capitalism. Some of them prefigured also, what is now almost a common place already, the fact that the new economy is centered on the production of subjectivity. They are contemporary mythologies that captured the collective imagination explaining in simple ways what's going on and providing glimpses about the future. Not surprisingly Boris Groys considers that following the death of God, the conspiracy theory became the only surviving form of traditional metaphysics as a discourse about the hidden and the invisible. Where we once had nature and God, we now have design and conspiracy theory.(1)

But who are "we" in these last mythologies?
In the beginning of the 80s neoliberalism took over and new forms of life were born, a new subjectivity appeared, mainly as a result of increased exploitation of our intimate capacities like affectivity, sensibility, imagination... Conspiracy theories and some areas from the periphery of culture like obscure SF and B movies were sensitive to the changes that appeared in the human shape, and, as a result, the reptilian was born. The reptilians appeared in movies, writings, peoples dreams, in repressed memories of abductions extracted under hypnosis and they were retrospectively projected back onto the entire history.

The reptilians are described as cold and calculating individuals devoid of empathy, extremely individualistic and competitive, with lack of compassion, "far less emotionally sensitive than humans". They are mostly from the ruling class, like successfully CEO's, media moguls. And they are contagious, they seek to influence everyone by stimulating the behaviour patterns of the reptile region of the brain that is responsible for hierarchical thinking, aggression, conflict, division, lack of compassion, etc.(2)

Now we know that the reptilians do exist. Of course, in the scientific research they are not called like that but psychopaths. The main characteristic of the psychopath is the same as that of the reptilian, the lack of empathy with the others. And it seems like the psychopaths are likely to be found in the same places as reptilians, namely business, law, politics and the media, or, to put it in the words of Robert Hare, who did years of research on psychopathic behavior: “Wherever you find money, prestige and power you will find them."(3)

Psychopathy is a successful adaptive behavior for getting ahead in our type of society. In general if you are sensitive to the ecological, social impact of what you are doing and empathic with human and non human suffering you're out of business. In order to be economically successful you have to be a psychopath. Psychopathy is the job description for success.

This is in a way, for the 99%, a very comfortable situation - there are some bad guys, the one per cent of pigs, reptiles or anyway something fundamentally different from us, the relatively good guys, and they do all the bad economico-political stuff. There is a historical tendency to degrade what you want to exploit, dominate, torture or eliminate by identifying them as animals - to compare the victims to brutes who deserve such treatments. In this crisis the same mechanism was set off - there was a lot of hate towards the greedy bankers, hedge funds managers, towards the disgusting animals that started all this collapse.

But Neoliberalism or Financial Capitalism is not only on Wall Street, it is in our habits, patterns of perception and movement, in our reflexes, attitudes, desires. The most scary thing is not that the psychopaths are privileged and socially and economically rewarded in this Financial Capitalism, but the fact that this new economy and our way of organizing society is producing the psychopath. Recent studies using fMRI and magneto-ecephalography (MEG) have established that cultural experience and the way our society is organized radically shapes the microstructure of the brain, virtually influencing all critical brain areas; shaping and determining neural patterns; affecting brain structure; and modulating cognitive function. Our bodies and minds are organized by these reptilian impulses and empathy is the "obstacle" that is wiped out in this financial reality (4). We are all reptilians now.

The new subjectivity was so much different from the previous one of the industrial capitalism that it was perceived as radically alien - it comes from far away, another galaxy or from underground bases. The neoliberal subjectivity appeared as something repulsive, sometimes scary, the new corporate life was perceived as a fundamental evil.

Similar phenomena seem to happen in periods of fundamental socio-economical change. Michael T. Taussig describes how in South America, as a result of colonialism and the appearance of Capitalism, new forms of exploitation appeared with effects like: the individual is dislocated from the community. Wealth exists alongside crushing poverty. Economic laws triumph over ethical ones. Production, not man, is the aim of the economy, and commodities rule their creators. All this new situations were perceived as manifestations of the Devil and the collaboration with the new economy was perceived as a contract with the Devil.(5)

This perception changed quickly and the previous horror of capitalist organization of society became ordinary reality, normal everyday life. This kind of normalization seems to be happening all the time and was happening with the reptilian too. At the end of 80s the cultural assimilation/camouflage of the reptilians looks to be completed. Movies like They Live or Society captured very well this situation - you need special lenses or a special sensibility to can perceive or feel the reptilians and the horrible things that they (we) do.


In the former Eastern Block same process happened but with a bit of delay. In the beginning of 90's in Romania, when people started to travel to the West, all kinds of stories about their contact with the capitalist subject appeared. They were depicted as cold, individualist, non empathic, with fake professional smiles, non-human, robot-like, without soul or with a small one. But turbo-capitalism arrived at full speed and all these stories are gone, we are the same species now, yet with minor cultural differences. Very quickly the reptilian becomes the normality, and this perception of difference disappears.

It looks like in order to be able to criticize our own form of life we need a contrast, a big shift in the economic and social forces that are producing us. In transition periods between two systems (as it was the beginning of neoliberalism) there are short time-windows in which the shape of the subjectivity can be visible. But what can be done in a situation like the current one when the difference that rendered the production of Homo-Saurus visible has quickly disappeared? 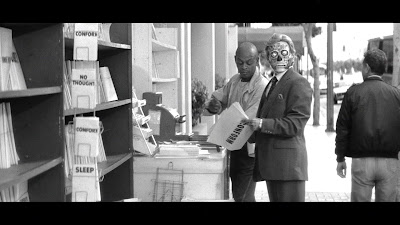 Film still from They Live, 1988, by John Carpenter

One of the favorite solutions of conspiracy theories for defeating the reptilian is love, to send love right along their energy streams. Make the Reptilians defeat themselves by having them transmit love energy wherever they intend to travel, abduct, possess, etc.(6) This makes sense, if the reptilian's main characteristic is a total lack of empathy, love as radical empathy seems to be the solution. Love is the opposite of reptilian-neoliberal simple and efficient, profit-oriented algorithms, individualism and permanent competition with the others. Love as radical empathy is one of the few states of being where we can be, sometimes in a dramatic way, triggered out of our economic patterns of perceiving all human and non human presences and relations. Nevertheless, there is a big problem with this kind of solution, it is not very helpful, it's like saying that the solution against poverty is to get rich, which may be true but has little practical use. The problem is that there is no place from where the states of mind and feelings related to love and empathy can be experienced because they are almost erased from the current map of our subjectivity.


1. Boris Groys, Self-Design and Aesthetic Responsibility http://www.e-flux.com/journal/view/68
2. David Icke, The Biggest Secret, Scottsdale Arizona: Bridge of Love Publications, 1999
3. A Radical Blackfoot: Capitalism: A System Run By and For Psychopaths, http://aradicalblackfoot.blogspot.com/2007/02/capitalism-system-run-by-and-for.html?m=1
4. Gary Olson, Empathy and Neuropolitics: This is your brain on neoliberal culture. Any questions? http://home.moravian.edu/public/polsci/pdfs/EmpathyAnd%20Neuropolitics.pdf
5. Michael T. Taussig, The Devil and Commodity Fetishism in South America, Chapel Hill: The University of North Carolina Press, 2010
6. The Mystic Avenger, How to defeat the Reptilians, http://www.mysticalwonders.org/group/about3077.html